“Speedie’s enthusiasm for his subject is infectious, as he lovingly details its natural history.” —Philip Hoare, The Guardian

“Authoritative and well written . . . . The book truly comes alive with Speedie’s recollections of his early basking shark surveys.”—Paul Critcher, Geographical, offical magazine of the The Geographical Society (with IBG)

“A Sea Monster’s Tale . . . . reveals the history of shark hunting in UK waters, while transporting the reader on a voyage through stormy seas charting this elusive misunderstood plankton-feeding fish, to its protected status today.”—Polly Pullar, The Scots Magazine

“An engaging and well-researched summary of what we know about this vulnerable shark.”—David Sims, The Marine Biologist 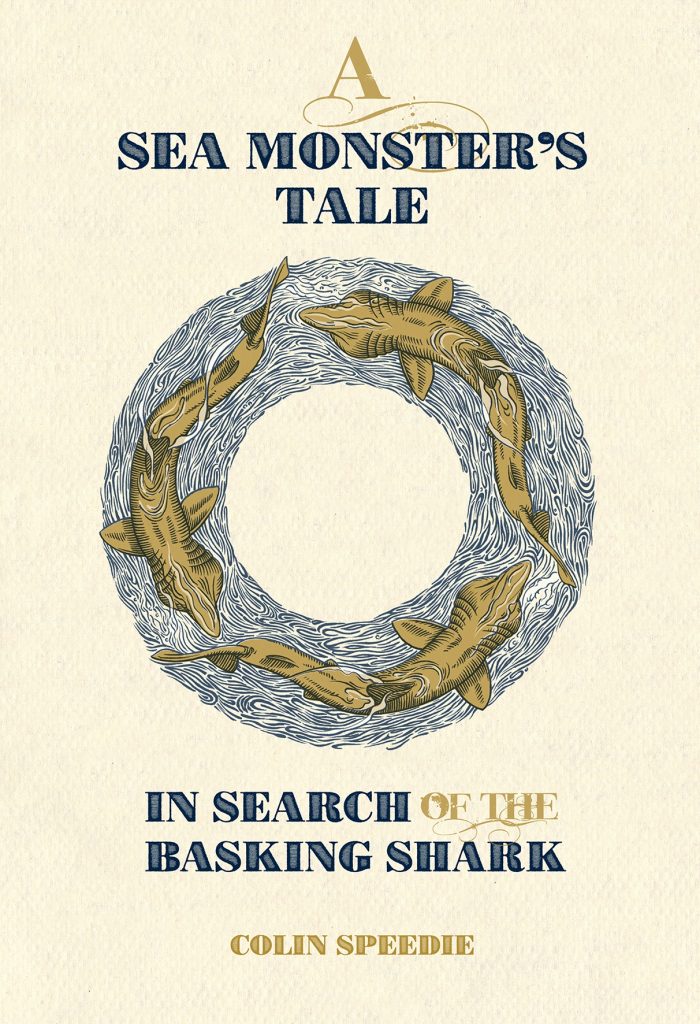 Launched in March 2017, Colin Speedie’s book takes us from swashbuckling hunts of giant sharks by reckless individuals with makeshift harpoons, through an age of mass slaughter, to the author’s personal shark-tracking sailing adventures in the name of conservation.

There are few marine creatures as spectacular as the Basking Shark. At up to 11 metres in length and seven tonnes in weight, this colossal, plankton-feeding fish is one of the largest in the world, second only to the whale shark. Historically, Basking Sharks were a familiar sight in the northern hemisphere – off the coasts of Norway, Scotland, Ireland, Canada and the USA, for example. In an 18th Century world without electricity, they became the focus of active hunting for their huge livers containing large amounts of valuable oil, primarily used in lamps.

Catch numbers were small enough to leave populations largely intact, but during the 20th Century a new breed of hunter joined the fray, some driven as much by a need for adventure as for financial gain. With improved equipment and experience, they exploited the shark on an industrial scale that drastically reduced numbers, leading to localised near-extinction in some areas.

From the 1970’s onward a new generation took to the seas, this time with conservation in mind to identify where the shark might still be found in the waters around the British Isles, employing new technologies to solve long-standing mysteries about the behaviour of this elusive creature. Using the best of both old and new research techniques, the case was built to justify the species becoming one of the most protected sharks in the oceans.

Today, the Basking Shark is a much-loved cornerstone of our natural heritage. There are positive signs that the population has stabilised and may even be slowly recovering from the damage of the past, proving that timely conservation measures can be effective.

Join us on a journey amidst wild seas, places, people and conservation history in the battle to protect this iconic creature – a true sea monster’s tale.

The book is available via the publisher Wild Nature Press c/o Princeton University Press, and all good bookshops.